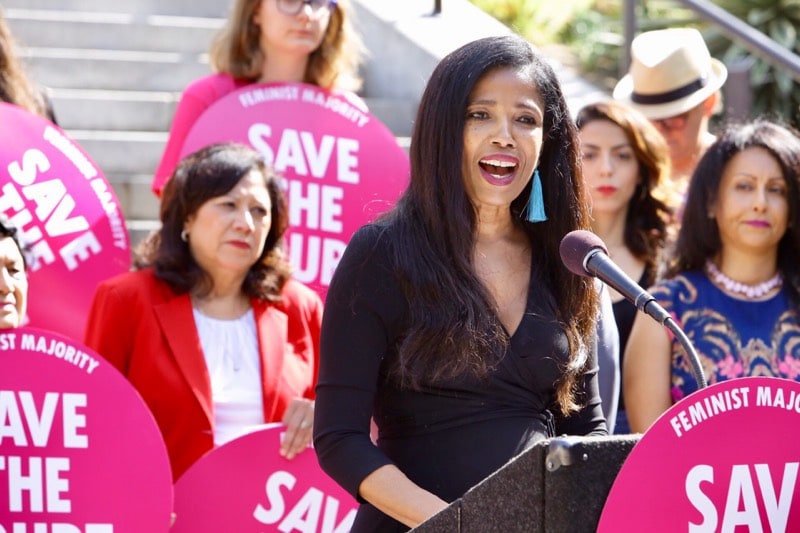 Good morning. My name is Areva Martin and I am a civil rights attorney and a children’s and women’s rights advocate.

Like my good friend honorable Senator Kamala Harris, and her esteemed colleague, honorable Dianne Feinstein, I’m proud to be part of the resistance!

And this isn’t the anonymous resistance! I am not ashamed to stand before you and go on the record to state that Judge Brett Kavanaugh presents a clear and present danger to the civil rights of women, minorities and all Americans.

I’m proud to add my voice to the more than 100 civil and human rights groups who have united in opposition to Brett Kavanaugh’s nomination to the supreme court.

Kavanaugh’s record on voting rights reflects a willingness to disenfranchise millions of minority voters. As a judge on the dc circuit court of appeals, Kavanaugh voted in 2012 to uphold a South Carolina voter ID law that the Obama administration said would disenfranchise tens of thousands of minority citizens. Obama’s justice dept blocked the law finding that 80,000 minority registered voters in South Carolina did not have DMV issued ID.

When South Carolina sought approval for the law, Kavanaugh wrote the opinion upholding it finding that the controversial law did not have a “discriminatory regressive effect” . He said that many states had enacted stronger voter id laws as a justification.

The suppression of black and Hispanic voters didn’t matter to judge Kavanaugh. Nor did it matter that South Carolina did not present a shred of evidence of voter fraud to justify the law. And what Kavanaugh didn’t say in his opinion was that those “other laws” were in reality acts of minority voter suppression, including the closing of polling places in or around minority neighborhoods; and the elimination of early voting days, which we all know is really aimed at stopping the tradition of African Americans from voting after church on Sundays.

This opinion signals that when it comes to voting rights, Kavanaugh will be a reliable 5th vote siding with the conservative majority which in 2013 gutted the voting rights acts, ruling that states with a long history of voting discrimination no longer needed federal government approval for election changes.

This made the 2016 presidential election the first in 50 years without the full protection of the act. The result was lower black turnout in swing states like North Carolina and Wisconsin.

This year alone, the conservative court upheld voter purging in Ohio and racial gerrymandering in Texas.

Black women helped elect a democratic governor in Virginia, a democratic senator in ruby red Alabama, Andrew Guillum in Florida, Ben Jealous in Maryland, Stacey Abrahms in Georgia and Ayanna Pressley, who is set to become the first black woman Massachusetts has sent to congress in its history.

Since 2008 black women have turned out to vote at rates higher than any other demographic.

When it comes to voter registration and participation—black women are as Beyoncé might say—getting in formation—and we can’t let an appointment of Brett Kavanaugh dim our bright light or strip away the progress and hard fought gains over the last five decades.

Judge Kavanaugh’s legal record makes it clear his mind is already made up. If appointed to the supreme court, he would vote in lockstep with the Roberts’ 4. Voter disenfranchisement would get worse; gay rights would take a giant step backward; and women would find it harder to win workplace discrimination lawsuits and assert their reproductive rights.

In essence, seating a supreme court nominee with an obvious disdain for fundamental civil liberties like Brett Kavanaugh will change American life as we know it.

I am calling on each and every one of you to join the resistance. Protest. Resist. Lift your voices. Call, fax and email democratic and republican senators.

Let them know, that women across California stand with Senators Harris and Feinstein in calling for the withdrawal of judge Kavanaugh and the commitment to an America that respects the civil rights of all and that is in the words of the late Senator John McCain’s daughter—already great.