“Poor People Are Dying in Jail while You ‘Talkin Loud and Ain’t Sayin Nothin”: An Open Letter to Trump by an Educated Black Woman

It’s me again. And this time I’m not just speaking out on behalf of educated black women. I want you to know that for the more than 46 million African-Americans that you purport to be suddenly concerned about, we’re not convinced of your sincerity. Perhaps you didn’t know this but African Americans, like you, often talk in code. Right now, in response to your week long pitch, many are referencing a colloquial favorite: “you talking loud, but ain’t sayin’ nothing.” 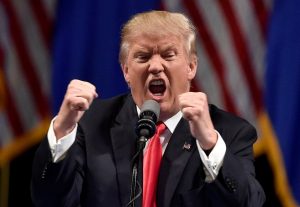 Your recent attacks on Hillary Clinton and the Obama administration are falling on deaf ears. While you are criticizing Democrats, calling Clinton a “bigot” and using hyperbole to do what can only be characterized as sheer manipulation, the first African-American president is taking steps to reform the criminal justice system in ways that will have positive, long term effects on the black community and will far outlast your vacuous verbal appeals.

President Obama, his justice department and a team of civil rights lawyers recently intervened in a Georgia case which challenges the fixed bail schedule for people who are arrested. It’s not clear to me that any of your African-American advisers informed you of the pernicious, systemic racial policies utilized by the police and the court system in Ferguson, Missouri, all of which was revealed in the aftermath of the Michael Brown shooting.

That city and countless others across the nation routinely target African-American motorists, making false arrests and assessing fines to trap black people in an endless system of escalating fees that result in jail time. Unable to pay the fines or make bail, many black people lose their jobs, and in some cases, custody of their children. And some people, like Sandra Bland, even die in jail because they are unable to make bail. This problem is virtually nonexistent for wealthier white people in cities like Ferguson, who because of their financial wherewithal are able to post bail and be released while awaiting trial. This “debtor prison system” violates the 8th and 14th amendment rights of an entire class of people.

This fall the 11th Circuit Court of Appeals will hear a case–Walker v Calhoun–that challenges our current bail system which forces people to remain in jail, not because they are a danger to the public, but simply because they are poor. There is no legal precedent that gives the Obama administration a clear path to victory, but because he and the Democratic Party are committed to criminal justice reform, they are courageously standing up and challenging a system that disproportionately impacts African-Americans and poor people.

None of the Republican attorney generals or legal scholars that represent your party have similarly dared to intervene and stand up for the millions of people victimized by a bail system that is biased in favor the wealthy. There was no mention of reforming the bail system in the platform adopted at the Republican National Convention, and the last time I checked your website you didn’t mention it either. I’ve yet to hear you provide any concrete examples of how you will address racial and economic disparities in our justice system. I’ve only heard your empty, meaningless platitudes and your pleas for us “to trust you.”

Any genuine effort to court the African America vote or bring more black voters into the GOP has to address the deep rooted biases in our system of justice, and include substantive plans that are followed by the necessary actions to fix them. Like you, President Obama and Hillary Clinton could be on an ego-boosting vanity tour. In fact, Hillary could be holding rallies every other day and speaking to predominantly white audiences about how bad life is for “the blacks.” But instead, she and other leading Democrats, particularly President Obama–are quietly going about the business of dismantling the “criminalization of poverty.” That is why my vote and the black vote is with her.