If Women Channel Their Inner Rosa Parks, Trump Will Lose by a Landslide

If Donald Trump’s bigotry and xenophobia weren’t reason enough to work to defeat him, he gave all women two additional reasons on Monday night: Rosie O’Donnell and Alicia Machado. Trump’s personal attacks on these women and mothers went beyond anything we have ever witnessed during a presidential debate. We can laugh it off; excuse it away; or we can remember the lessons of our mothers, grandmothers and the iconic Rosa Parks.

Affectionately known as the “first lady of civil rights,” Mrs. Parks refused to give up her seat in the colored only section of a bus to a white person and move to the back of the bus. Her act of defiance spurred efforts to end racial segregation. President Obama, among many others, credits Parks’ “singular act of disobedience” with launching the modern civil rights movement. Her courageous actions show us that we all have a responsibility to ourselves and each other and to challenge anything and anyone that threatens the principles we hold absolute. Parks once remarked “that the only thing she was tired of was being…mistreated.”

I don’t know about you, but like Mrs. Parks, I’m tired of being mistreated by Donald Trump and I’m ready to channel my inner Parks.  Monday’s night debate was supposed to be a golden opportunity for Donald Trump to stand on stage before a Super Bowl size television audience, and show the American people he could be even tempered and presidential, a move his handlers hoped would broaden his appeal amongst educated white women and minorities—two groups his campaign desperately needs to win the Whitehouse.

He failed miserably on all accounts, and instead used the debate platform to take body shaming women to an all-time low. When Hillary Clinton reminded 84 million viewers that Trump has a history of insulting women–calling them “dogs, pigs and slobs”–rather than apologize he doubled down and reaffirmed his misogynistic beliefs. He even reveled in his years’ long feud with comedian Rosie O’Donnell, suggesting that “everyone agreed” with his verbal attacks on her.

The absolute lowest moment of the night was when Trump acknowledged that he body shamed former beauty pageant winner Alicia Machado.  A 19-year-old at the time, the Venezuela native says she was relentlessly teased by the Miss Universe co-owner, Trump, who called her “Miss Piggy” and “Miss Eating Machine” after she allegedly gained 42 lbs. Now a U.S. citizen and a mother of one, the 39-year-old said she was battling eating disorders when Trump made his humiliating comments 20 years ago.

After sparring with Clinton over Machado at the first presidential debate, Trump had an opportunity to send a message to millions of educated suburban women that he no longer has a “woman problem” by taking responsibility and apologizing for his insensitive comments.  He even had an opportunity to deny the comments or to say they were made years ago by a private citizen and that he has since learned that such remarks are hurtful and have no place in today’s discourse. Trump could have even said that although the statements were made, they provide an opportunity for everyone to learn about the harmful effects of body shaming on young girls and women.

Not surprisingly, he did none of the above. Instead, he arrogantly reaffirmed his insults on Fox and Friends, saying “she was the worst we ever had. She was the winner, and she gained a massive amount of weight, and it was a real problem.” 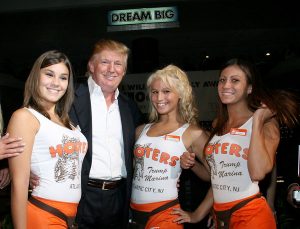 Over the years, Trump has consistently demonstrated that he views women in a manner similar to one of his prized buildings–not as intelligent human beings with minds of their own, but as properties to be objectified and sexualized.  Nowhere was this clearer than on his television show The Apprentice, where Trump turned the program’s iconic boardroom into his own private catwalk, making sexist remarks and asking the male contestants to rate the female competitors on their attractiveness.  Trump reportedly even had the audacity to summon one female contestant before him and —a la Roger Ailes—asked her to twirl around.

It’s hard to believe that someone running for the presidency of the United States—whose daughters, wife and female campaign manager repeatedly try to convince us that he loves and respects women—blatantly taunts the millions of female voters that he clearly needs to be successful in November. Over 56% of the votes cast in November will be by women and in order to win, Trump will have to garner 48% of those votes. All of the national polls show that the majority of women voters harbor a deep dislike for Trump, and his body shaming comments on Monday and Tuesday give women even more reasons to do so. But as President Barack Obama reminded us so eloquently at the Democratic National Convention, it’s not enough to boo, we must vote. It’s time to end the free ride that Trump has gotten and to stop his public assault on women. It’s time to channel our inner Rosa Parks. All of the gains that we have made over the last few decades are at stake in this election. A Trump presidency will signal that women—our bodies, our weight and even our rights to take a few days off for a routine illness—are fair game.

We don’t tolerate body shaming from comedians or kids on the playground, and we definitely cannot tolerate it from a man who wants to be our leader. Women we have a unique opportunity to stand up and to send a loud and clear message that we deserve to be treated with respect, and any candidate that refuses time and time again to do so will not set foot in the White House.

Rosa Parks didn’t cower in the face of racial segregation in Alabama, and nor should women or men recoil in the face of Trump’s unprecedented assault on women.