Do Women Need to Burn Our Bras Again to Get Men to Stop with the Double Standards?

Hillary Clinton doesn’t smile enough. She doesn’t show the American people enough of her heart. Gretchen Carlson is a gold digger because she settled her sexual harassment case against Roger Ailes out of court rather then proceeding to trial. The women who have accused Bill Cosby of sexual assault are only looking for a payday. This constant drumbeat of statements reveal the deeply entrenched and insidious double standard that women in this country have to labor under each and every day.

Not one pundit has suggested that any of the male candidates running for president  focus more on revealing their hearts to the American people. I’m not sure what this vague statement even means. But by any reasonable interpretation, it suggests that people might like Hillary more if she adjusted her personality to comport with their traditional notions of women as nurturers rather than powerbrokers. No one cared, commented or suggested on a regular basis  the need for Bill Clinton, George Bush or Barack Obama to show their softer sides.

Yet, almost daily naysayers, and even some supporters of Hillary, consistently raise questions about the price of her suits, the length of her hair, her physical stamina, and yes, even her smile, or lack thereof. It’s not enough that she has openly talked about the joys she experiences as a mother and grandmother. Nor is it enough that she has consistently surrounded herself with female leaders from the Mothers of the Movement to other elected officials and have made issues that resonate with women a hallmark of her campaign.

If elevating the pain and sorrow that African-American mothers who have lost their sons to gun violence to the national stage is not showing one’s heart, I can’t imagine anything that Hillary could do to satisfy those who are unwilling to acknowledge their gender biased evaluation of her candidacy.

Similarly, when Gretchen Carlson skillfully negotiates a whopping $20 million settlement even before one deposition is taken in her sexual harassment case, rather than lauding her  and her female lawyer for their acumen and shrew negotiation skills, Gretchen is labeled a gold digger. When her case was originally filed, Ailes and team touted that they would vigorously oppose the suit and expose Gretchen as a disgruntled ex-employee and under performer who was fired for poor ratings. That plan was quickly abandoned.

Given my experience as an employment lawyer, I can only imagine that 20th Century Fox uncovered troves of damaging information that supported Gretchen’s claim of sexual harassment and rather than have that information exposed in a public trial, they gladly cut their losses and settled her suit. This nearly unprecedented payout is curiously being spun in a way that cast aspersions on Gretchen rather then the predator. In my St. Louis (Nelly) voice, Pluheeeese!!!!!

Finally, scores of women who claimed they were sexually assaulted by men including Bill Cosby joined legislators in Sacramento California today to testify in support of a bill that would eliminate the statute of limitation for rape in the state. In their powerful statements, many of the women recounted the harsh criticism they received after publicly speaking out against Bill Cosby. None of these women have been able to pursue criminal or civil charges against Cosby because of respective statues of limitations. Hence, there has been no adjudication of their claims and Cosby has not had an opportunity to defend himself in a court of law.

However, just by speaking up, the women have been judged by the court of public opinion and the verdict is pretty damning.  They have been called whores, gold diggers and opportunists. Sadly such pejorative terms are reserved mostly for women, and hardly ever used with respect to men. No one called Hulk Hogan a gold digger when he sued Gawker for releasing secret sex tapes of him and his friend’s wife.

We have made great strides in this country as it relates to enacting laws that attempt to even the playing field for women and men. However, we continue to be plagued by decades old stereotypes and double standards for women that have quite simply outlived their usefulness. As we talk about political revolutions in this 2016 election cycle, lets add to the list, the need for a gender revolution. Do we need to burn our bras again to get men to stop with the double standards? 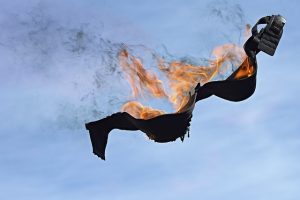