During the Republican presidential primary, Donald Trump cruelly mocked a disabled reporter for disputing his wild claim that thousands of Muslims in New Jersey cheered the terrorist attacks on 9/11.  It’s hardly surprising, then, that one of Trump’s hand-picked cabinet nominees would share his black-hearted views and display a similar level of contempt for the disability community.

Betsy DeVos, Trump’s nominee for Education Secretary, told members of the Senate Health, Education and Pensions Committee yesterday that when it comes to educating children with special needs, “it should be up to the states” to determine whether publicly funded schools should be forced to adhere to provisions of the Individuals with Disabilities in Education Act (IDEA).

If you never heard of IDEA, what you need to know is that it’s a crucial piece of federal legislation that ensures that students with disabilities are provided  a free and “appropriate” public education, one that’s tailored to their individual needs.  Without the law, the parents of the 6.7 million children with special needs would be on their own to find—and pay for—a private school in which to enroll their kids.

As a parent of a special needs student  and civil rights lawyer that has represented countless families in litigation against schools that have failed to provide their special needs child with an appropriate education, I know firsthand that IDEA is the only safeguard families have and undermining the law will have a disastrous impact on millions of students.

But DeVos, a billionaire by marriage, is unconcerned with the financial hardships that would result from scrapping the law.  When questioned by Massachusetts Senator Elizabeth Warren about her own educational experience, DeVos admitted that neither she nor any of her children had ever taken out a single educational loan.

DeVos’ one-size-fits-all solution for those who don’t have her billions is to provide everyone, including families with special needs children, with school vouchers—under the misguided belief that they could use the money to send their kids to the school of their choice. DeVos is apparently ignorant of the fact that voucher schools aren’t legally required to provide the necessary accommodations for students with disabilities, which is why nearly all advocacy groups oppose voucher programs. 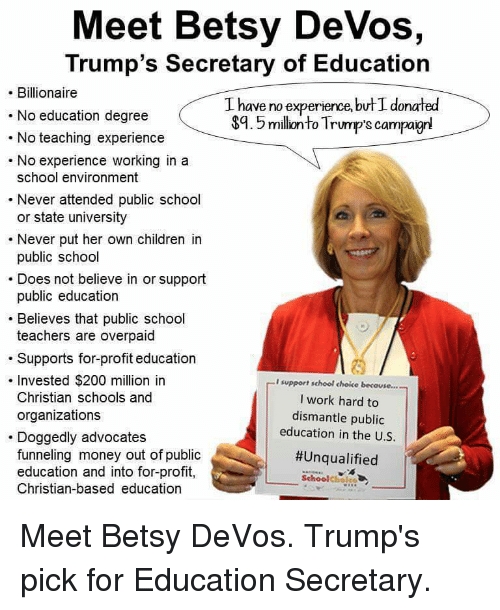 But DeVos’ love for charter schools is nonetheless unwavering, even though studies have shown they aren’t reliably better. In Michigan—where DeVos has spent tens of millions of her own money to support her pet project—most charter schools perform below the state average. In fact, as Michigan has expanded charters over the past two decades, its rank has fallen on national reading and math tests.  And when compared to traditional public schools, Michigan’s charter system serves fewer children with disabilities.

Devos’ lack of knowledge about public and private schools was on full display  when Minnesota Senator Al Franken asked about her views on using testing to measure proficiency or growth.  Franken was shocked when DeVos became confused in answering question.

“If you’re talking about taking money out of our public schools and doing vouchers, it’s really important to assess how schools are doing,” Franken said. “She didn’t have a clue what I was even talking about.”

Besides vouchers, about the only thing DeVos seemed sure of was her belief in guns, and the need to have them in rural schools for protection. “I think probably there, I would imagine there is probably a gun in a school to protect from potential grizzlies,” she said.

After hearing her views on special needs children and education, it’s clear the biggest threat to our kids isn’t bears, but DeVos herself.

“I’m not going to vote for her,” said Franken.  Let’s hope more senators have the courage to follow Franken’s lead and stand up for kids with special needs. The only way to do so is to vote no on DeVos.